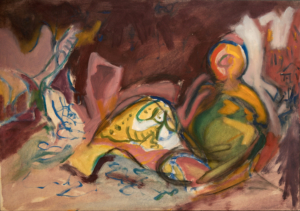 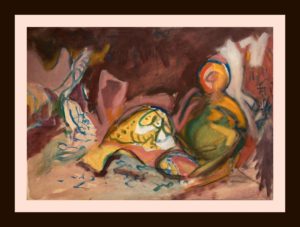 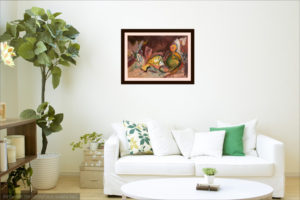 oil and charcoal on paper

This series began from a dream I had, a figure moving along a landscape being followed by other figures.  My first painting of this had the larger figure moving away from the smaller ones.  In subsequent paintings, I found her turning towards the others.  I then found these other figures becoming her children, as well as other creatures in the world.

The idea of mother and child: in some paintings this is a literal interpretation, you see a mother and a child.  In others, the interpretation is looser, and we see ideas of birth and creation, whether from a human mother, or in a larger more universal sense.  In many paintings, such as creation, we see a bit of both.  We see the mother and the child, and we also see other creatures in the world.  Is the child being born into this world also occupied by these other creatures? Is there the idea of the universal mother giving birth to all?  Perhaps the answer to both questions is yes, let us endeavour to investigate that.

Firebrush, move me
Scroll to top
×