Complementary colors are colors that sit on the opposite side of the color wheel from each other. They are a fundamental aspect of color theory, but there are still a lot of questions about them.

Current scientific research has put into question many of our traditional assumptions about them.

I talk about them more in detail in my book, but it takes until later in the series, book 2, until I do, because understanding them requires a bit of background.

However, we can say a few basic things about them:

When mixing paint, they combine to form a grey, near black, or brown.  A better way to think of it might be that the complement of a color brings that color towards the center of the color wheel.

They can create both an attraction and a contrasting movement.

Traditionally, it is considered that in an optical sense they complete each other, but I don’t think current research full agrees with this. 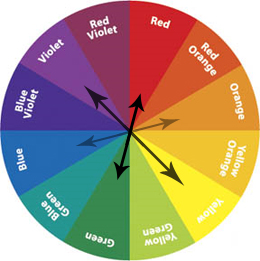