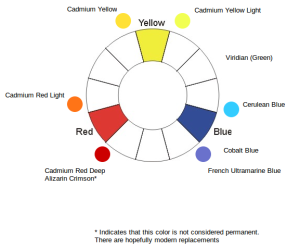 If we are using light or computers, then the primary colors are: red, green and blue.

If we are using transparent ink, such as in printing, then the primary colors are cyan, magenta, and yellow.

For oil painting, traditionally the primary colors have been red, yellow, and blue. Some people now consider cyan, magenta, and yellow to be the primaries for mixing oil paints. I find that a combination of both are useful, thus resulting in what is often called spilt primaries, or co-primaries.

Additive color is used for lighting, computer displays, any place where color is being emitted.

Subtractive color is used in painting where colors absorb light and reflect back the color that they do not absorb. Red is a color that absorbs everything except for red.